A guest article on current strategic considerations in the Retail sector.
By Ray Ffrench, a Technology Strategist ... 🛍️

If you ask a hundred people to define strategy, you will get a hundred different answers. Strategy is not planning, it is not tactics, and it is not a combination of these, or indeed other factors such as goal setting. These are related to strategy but they are not strategy.

A really simple, useful and intuitive definition of strategy is provided by the Oxford English Dictionary. Here strategy is defined, in slightly archaic language, as: the art of war; that which allows one to enter battle under the terms and conditions most suitable to oneself.

This simple definition helps to define the behaviours that will result in the war being won. At the highest level possible organisations will adopt approaches that are based on either a low cost, differentiation or niche.

The grocery sector is particularly interesting for those interested in retail strategy. Essentially Waitrose, Aldi, Lidl, Tesco and Sainsbury sell the same range of goods but the strategies for doing so are very different. Waitrose is differentiated service, Aldi and Lidl are both low cost base, but what about Tesco and Sainsbury? It could be argued that their strategy has been at best fuzzy, neither one nor the other, and they have suffered as a consequence.

There are a number of effective tools that can help formulate a strategy for retail. Understanding the environment in which a retailer is looking to succeed can be aided by a PESTLE analysis. This helps organisations take into consideration macro and micro issues that will affect their business from Political, Economic, Societal, Technological, Legal and Environmental perspectives.

Let's take a look at an example Retail PESTLE... 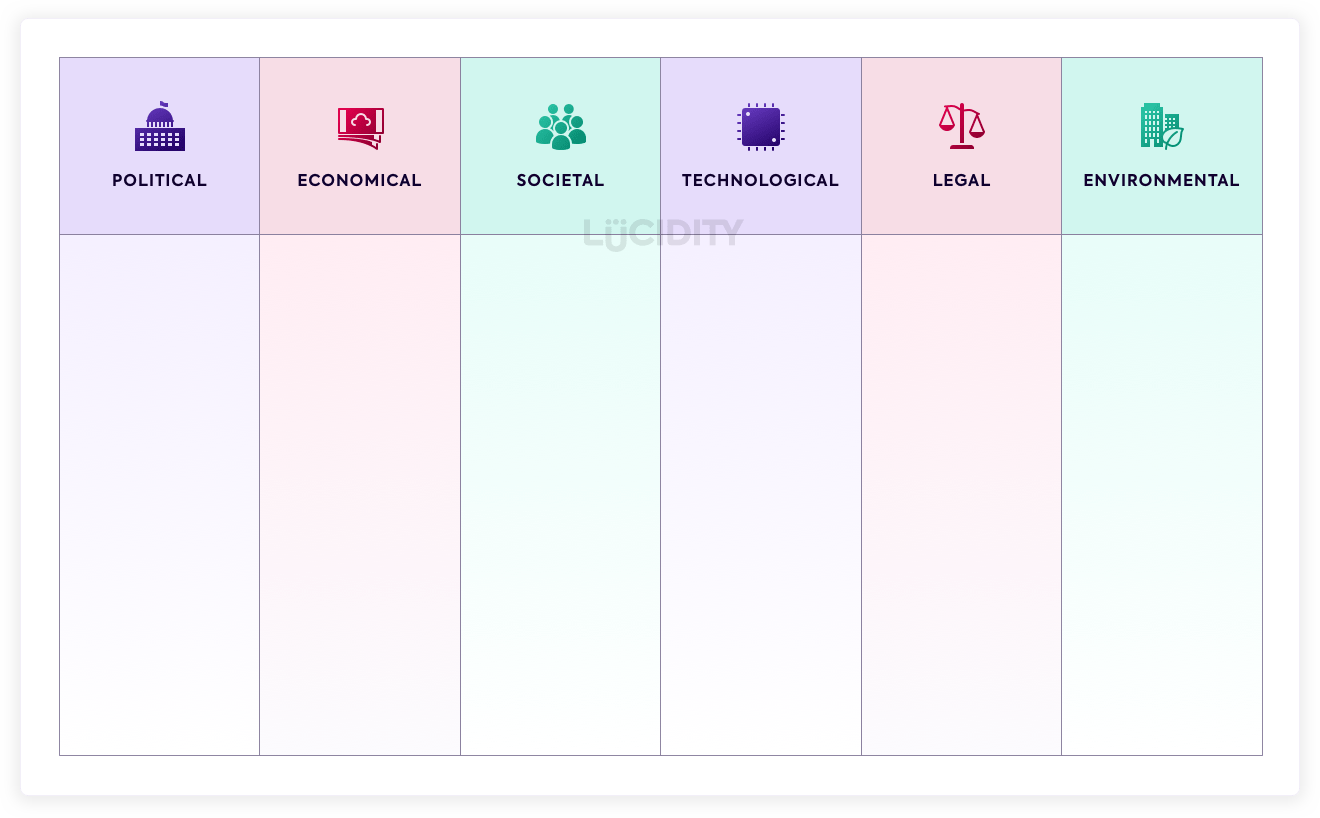 Brexit, for example, could have a negative impact on ‘Just in time’ supply chains which in turn could affect stock availability and pricing.

Jeweller Tiffany reported in June 2019 that worldwide sales fell by 3% to $1bn (£787m) in its first quarter as it was hit by lower-spending tourists. Meanwhile like-for-like sales at the New York-based firm fell by 5%. The company also said it could be hit by tariff increases on its US exports to China, as part of a trade war. There is a close link often between political and Economic factors.

The BBC website on 5th June 2019 showed the importance of changes in society in an article by Colleta Smith who posted the following personal analysis of Arcadia:

"In my teenage years almost every Saturday was spent moving from one Arcadia store to another - from crowding into Miss Selfridge photo booths for pictures with friends to fawning over the Kate Moss collection in Topshop. But times have changed.

"Today's teenagers have grown up expecting to order clothes to their home and buy them on their phone. Boohoo, Misguided, and PrettyLittleThing have so many cheaper items available that they've hooked a younger generation who expect to wear an item once, post a picture on Instagram and then buy something else for the next Friday night. Arcadia hasn't held onto those customers in their 30s who were loyal for years. The fact that Topshop haven't stocked above size 18 in their stores is alienating for women with changing body shapes."

This is a really interesting illustration of the need for strategy to evolve and how an effective strategy can deliver positive results. How will Boohoo, Misguided and PrettyLittleThing evolve its strategy given the societal change forcing retailers to have a clear and effective green credentials? Is a one used piece of clothing consistent with a green and ethical agenda? I would expect these organisations to push reuse or recycling.

The move away from physical shops and the use of mobile devices as a means of fulfilling purchases has been perhaps the biggest impact on traditional high street retailers. Understanding customers buying habits across channels (in store vs online) is a fundamental challenge; becoming a digital organisation is the shorthand for being able to do this.

Generation X, Y, Z and beyond will expect to be able to interact with retailers digitally. There will be a cost for retailers but the digital economy offers huge rewards. It is now possible for a small business to have a digital presence and thus give itself a global market. A small hat maker in a remote village can now sell its hats across the globe to discerning customers.

The working time directive and the minimum wage that are 2 examples of how legal factors can affect the success or otherwise of an organisation. Brexit will have an impact on the regulatory environment, businesses will need to try and plan the impact this will have on them. In the UK, betting shop profitability has been hit with the government imposing a maximum bet of £2 per play on Fixed Odds Betting Terminals (FOBT’s). Before legislation the maximum bet was £100 per play. The legislation had good intentions but it has consequences for shops and the people that work in them. If a shop is not viable it will close with the loss of jobs.

This is fast becoming the hottest topic on many agendas at a global, national and local levels. The emergence of Extinction Rebellion has had a major impact in London and elsewhere. As per the example above under societal changes, a ‘use once then throw away’ approach to products is not compatible with an ethical, good for the environment business. In June 2019, the media was reporting that dumping ground countries are returning rubbish to the country of origin. Mt Everest has just been cleaned up partially of rubbish from years of it being dropped by climbers. This increasing awareness of environment will impact strategies. In the UK, Waitrose for example is removing all plastic and customer a required to use re fillable containers for certain staple foods.

In summary PESTLE is a tool of intertwined factors each of which should be considered when formulating a Retail strategy.

Retail is a sector affected with huge changes and many challenges, and if you're in this industry strategy is vital to make sure you survive that war...

Remember to check out our guide on how to develop your own PESTLE.